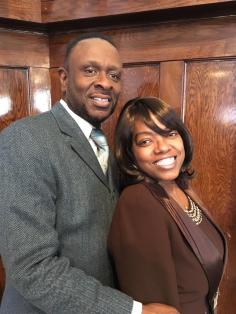 Pastor Ricky Harris serves as the Senior Pastor of Alpha and Omega Baptist Church on Chicago’s Westside. Prior to this appointment he served as Assistant Senior Associate Pastor of the Progressive Life-Giving Word Cathedral under the leadership of Senior Pastor Apostle Donald L. Alford.

In addition he was the Spiritual Advisor to “Project Reach” the churches Outreach Ministry. Prior to that he served as Chairman of the Men’s Fellowship entitled “Men of Destiny”, the coordinator of the Pastoral Care Ministry, an Assistant Church Administrator, A Sunday School Teacher, an instructor in the James B. Alford Bible Institute as well as a member of the Finance Committee. In addition he has proven himself to be a Marriage Advisor and Counselor.

Born and raised on the Westside of Chicago, he lnowa full well about growing up in the inner city.

Pastor Harris is a product of the Chicago Public School system and is a graduate of Lane Technical High School. He received his Bachelors of Theology Degree from the Chicago Baptist Institute and his Associate of Applied Science Degree from Olive Harvey Jr. College. He was an employee of Lucent Technologies in Naperville (23 years) as a Member of Technical Staff involved in software programming and testing.

Pastor Harris is married to Janice Elaine Harris and they will have been married 29 years come August. They have two wonderful children, daughter Latrice and son Martin and they have been blessed with two precious grandsons.

Pastor Harris accepted his call to ministry in 1989 at the then United Faith Tabernacle Church on Chicago’s Westside under the leadership of Bishop Willie A. Treadwell – Pastor Emeritus. There he served as The Youth Leader, Sunday School Supeirntendant, amd Member of the Finance Commitee.

Pastor Harris was ordained an Elder in 1998 at Progressive Life-Giving Word Cathedral under the leadership of Apostle Donald L. Alford, there he was also appointed as an associate pastor in 2002. He was elected as Senior Pastor of Alpha and Omega Baptist Church in March of 2007 and preached his first sermon as Senior Pastor on April 1, 2007. Since becoming Pastor of Alpha and Omega the ministry has continued to grow numerically as well as spiritually.

Pastor Harris has been responsible for organizing street witnessing ministries, been involved in jail ministries as well as ministering to recovering addicts. His greatest asset is that he cares for those he ministers to and serves. Through him God has been able to bless many lives and we fully believes that the best is still yet to come.

He is truly a man that loves God and God’s people and he is a strong believer in the Bible. His motto verse is:

Isaiah 40:8 “The grass withereth, the flower fadeth: but the word of our God shall stand forever.”